“Nocella”, nowadays Nocelle, is a small hamlet near Positano, located at about 450m above sea level. Founded by Paestum survivors in 916, after their town was destroyed by the Saracens, it sits on a hill overlooking a large stretch of sea, in a strategic position that allowed them to keep a watch out for sudden attacks from Saracen pirates. The name derives from the ancient Greek νέος οίκος or from the Latin ‘nova cella’ (new chapel o new dwelling).

The old hamlet developed along a tiny pathway leading to the church located at a slightly lower position than the dwellings. A natural arch marks the entrance to the hamlet. Along the way lie the houses built in typical Moorish-like style. The single-nave church, built in1834, has a barrel vault and an apse with a very simple altar. Above the altar, enclosed in a niche, stands a painting from the1600s, representing the Deposition of Christ, or la Pietà. The pavement is decorated with typical Vietri tiles from around 1900. The oldest church in the hamlet however is the cemetery chapel, probably built around 1200 in a very simple architectural style with a vaulted nave and apse.

Near Vallone Porto, a spectacular canyon descending from 1100 meters to sea level, stands a humpback medieval bridge, the oldest in the whole region. 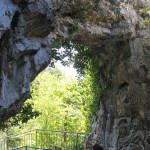 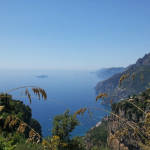 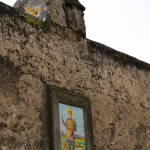 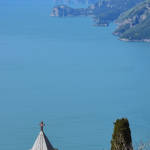 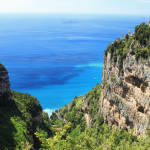