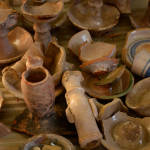 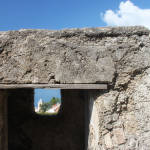 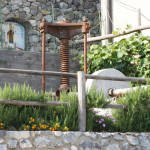 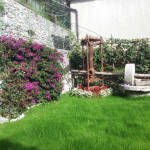 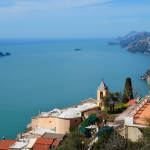 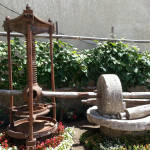 History of the house

The country house was built by our forefathers at the beginning of the 1800s in the style typical of the Amalfi Coast. They lived from farming local produce and exchanging these with the nearby communities in Agerola, Amalfi and Vico Equense. Produce was transported through the old mountain paths stretching along the Monti Lattari ridge. These same paths are today the ones that form the world-renowned walk, the Path of the Gods, offering amazing views and panoramas.

Besides farming the local produce, our great-grandfather, Antonio Cinque, invested in an olive-press, which shortly became the most important in the area. Our grandfather, Gennaro, carried on with the business, and doing quite well, bought patches of land along the Path of the Gods. A tireless worker, Gennaro roamed the mountain paths and went up and down the 1760 steps leading to Positano, carrying on his shoulders bundles of holm oaks, used for the covering and protecting of the typical citrus groves downstream, his own products and those obtained from cattle, pig and poultry farming.

In time the great production of eggs gave life to the “scioccola” an egg game of Arabic origin, held in Nocelle at Easter time, which culminates in a massive shared frittata at the end of the day.

The original century-old olive-press, the Antica Macina, is visible in the upper garden. The original structure was located in one of the Green Rooms, while the bedroom in the Blue Rooms, on the upper level of the Villa, was the master’s bedroom, where both our great-grandfather and grand-father slept.

The Villa was upgraded by our uncle Antonio, a well-known ball-room dancer in the area, who died a couple of years ago and was the original owner of the house. We have recently carefully refurbished and modernised the rooms, further enhancing the beauty of the place.

Our B&B gets its name from the old olive-press “l’Antica Macina” located in the garden. The press was carefully re-assembled, putting together all the pieces Uncle Antonio had kept together.

The mill wheel and base are made of local stone and a blindfold donkey was used to turn it. Around the second-half of the 19th century the original wooden press was replaced by a metal one, built by Pattison in Naples. Pattison was a mechanical engineering firm founded by Giovanni Pattison, originally a partner of Guppy & Co., which by 1861 had become the most successful mechanical engineering firm in Naples and the second largest in Italy.

Pattison produced ships for the navy but specialized in agricultural machinery, in particular mills, olive-presses and parts for pasta factories when there was a lack in military commissions. Our great-grandfather bought the olive-press from Pattison at this time.